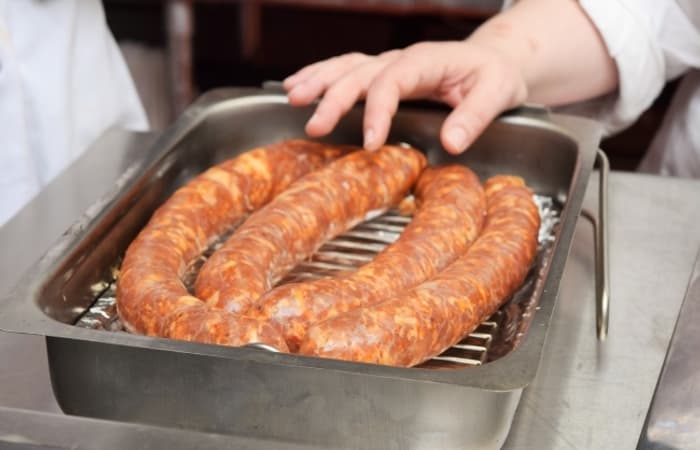 With more consumers looking for transparency in labeling, one category that has been heavily scrutinized is processed meat. Historically, synthetic ingredients have been added to meat products to increase their safety and shelf-life. As an added benefit, the flavor and texture change is significantly different between the non-processed counterparts.

Why are sodium nitrates/nitrites used in the first place?

Sodium nitrate and sodium nitrite are some of the most commonly used ingredients in processed meats. Nitrite contributes important functions, acting as a shelf life extender, antimicrobial (C. botulinum), antioxidant as well as contributing to flavor and color development. Nitrite is the reason that ham and bacon are colored pink. It is a vital component to the consumer’s perception of what ham, bacon, hot dogs, and other processed meats are meant to look and taste like. A good example of the impact of sodium nitrite is looking at the differences between pork loin and Canadian bacon; Canadian bacon is essentially cured pork loin. There is a distinct flavor and color difference between cooked pork loin and Canadian bacon. Without having sodium nitrite, these food products would be unacceptable for the consumer. But how do we get the same effect of synthetic ingredients using whole food ingredients?

Yes! Vegetable juice power. By purposefully growing vegetables, such as celery, in nitrate rich soil, the vegetable absorbs the nitrates making them available for further processing. The produce is then processed to concentrate the nitrates, while removing as much vegetable matter and extraneous flavor compounds as possible. This essentially makes the vegetable juice processors nitrate farmers. Once the nitrate has been concentrated it needs to be converted to nitrites via lactic acid bacteria, either through fermentation in the finished product (i.e. sausage) or by the ingredient manufacturer. This results in a whole food, naturally occurring source of nitrate/nitrite.

How do we formulate clean label processed meats into foods that meet consumer perception? The vegetable juice powder is standardized to a set nitrate or nitrite concentration based on how pure the ingredient supplier can make the powder. Since it is from a natural source, there are components such as sugar and fiber that are inherent in the powder. This dilutes the overall nitrate/nitrite levels and carries inherent color and flavor components of the original vegetable with it, although ingredient manufacturers are continually improving their processes. When examining the impact of nitrite concentration, 40ppm is the minimum needed for a curing reaction, but the color tends to fade after 45 days. Concentrations of 100ppm provide a good color fixing. USDA regulations have limits of 156ppm for commuted products (hot dogs), 120ppm for bacon, and 200ppm for immersion cured products.

What do consumers think?

From a labeling standpoint, unfortunately, the consumer is largely willingly deceived that vegetable juice powder does not contain nitrites. This is perpetuated in the labeling. When replacing synthetic nitrite with vegetable juice powder, three statements need to be on the label; the preface of “uncured” in front the of the product name, ‘no nitrates or nitrites except those naturally occurring in vegetable juice powder’, and ‘keep refrigerated below 40°F at all times’.

But why do products that clearly contain nitrites (from color and flavor), albeit from a vegetable source, not have a cured designation? By USDA regulations curing is defined the direct addition of sodium nitrite, not the indirect addition by vegetable juice powder. This creates confusion in what the consumer wants to believe they are purchasing versus what they are actually purchasing. It isn’t food companies trying to trick the consumer, but simply one-sided regulations. People love their bacon, but don’t want to see nitrites on the label.

Why is sodium erythorbate used?

Sodium Erythorbate is an essential component to some meat curing processes. It is a cure accelerator needed for items that have short hold times (such as hot dogs) or whole muscle meats that need assurance that the curing makes it in the center (such as bacon). By skipping or replacing sodium erythorbate, the processor can risk grey centers in their products where nitrite has not had the chance to cure the meat.

Yes! Cherry Powder from the acerola cherry is an effective replacement for sodium erythorbate. It is high in naturally occurring ascorbic acid that increases the rate of nitrite oxidation and inhibits the formation of nitrosamines, similar function to sodium erythorbate.

Why are phosphates used?

Phosphates increase the pH of the protein and allow greater water binding, leading to greater yields and creating a moist product with good eating qualities. They also help to prevent fat rancidity and the development of off flavors in reheated products. Particularly in chopped and emulsified meat products, such as sausages and hot dogs, the phosphates stabilize the meat proteins for products that stand up to further processing such as smoking and slicing.

Yes! Plum products are a viable replacement for phosphates. Research done by the University of Arkansas demonstrates the effectiveness of using plum products as phosphates replacers. Plum products are high in sorbitol and soluble fiber; the sorbitol which as a humectant pulling the moisture close and the fiber helps physically bind the water. Side benefits of using plum products are that they are high in organic acids and antioxidants. The organic acids do not significantly impact the product’s pH and are great flavor enhancers, which can allow both sodium and seasoning reduction instead of using enhancing flavors that are already there.

With the naturally occurring antioxidants, plum products reduce lipid oxidation and suppress warmed over flavor. They are also allergen free, easily dissolved in water, and enhance free/thaw stability. Besides all of the side benefits that plums add to processed meats, they are very label friendly. Fresh plum concentrate, dried plum puree, and dried plum powder read as such on the ingredient statement. The only exception is plum fiber, which reads as isolated plum product, (similar to how USDA requires other vegetable fibers are labeled).

In clean label development of processed meats, there are whole food ingredients that can deliver the same functionality as the synthetic counterparts. While developing, flavor, cost, usage level, and functionality must be considered. Need help developing with these clean label alternatives? Contact us for more information!