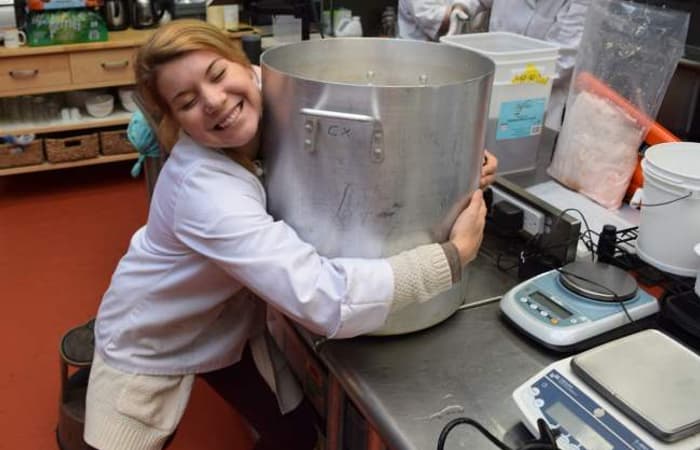 Hammin' It Up For The Holidays

Ahhh...the holidays! When a cook’s mind turns to all things roast beast.  There is nothing more spectacular that a nicely cooked roast as the centerpiece for your holiday meals.  One of my favorites? Ham. Ham is a perennial favorite at all holidays, from Easter to Christmas. I think its simplicity both in flavor and preparation makes it a wonderful choice for novice cooks and professional chefs alike. Unfortunately, the ham landscape can be a confusing one, what with all the “added water,” and “no cure,” and spiral slices out there. How do you pick the best ham for your holiday table?  Lemme show you the way!

So, what is ham anyway?

From the butcher’s perspective, a ham is the meat of the thigh of a pig. That’s it.  After that, it gets a little confusing.  The USDA’s standard of identity for ham is…complicated (keep reading) and then there’s city hams vs. country hams (which are cured quite differently) which need to be prepped and cooked differently.

The common brine-cured hams that we typically buy for our holiday feast are referred to as city hams. They’re different from country hams, which are dry-cured with a mixture of salt and sugar and aged after smoking. For this blog post, we’re going to focus on city hams.

There was time when city hams were made using traditional curing methods that submerged hams in a solution of salt, sugar, and sodium nitrite. Five or six weeks later, they were smoked for several days, then partially cooked. The hams were labeled “ham, partially cooked” and required baking before eating.

These days, most of the hams in our supermarkets are produced using quicker methods and are fully cooked. Modern ham manufacturing involves injecting (also referred to as “pumping”) the meat with curing solution. Injecting the cure immediately disperses it throughout the ham.  This faster method of curing does speed up processing time but it typically brings additives with it like phosphates, which will hold water in the meat, ensuring a “juicier” result, but honestly, the meat is a bit spongey and the flavor is not a great as a ham brined using traditional methods.

It’s All About the Water

The more water remaining in the ham after smoking/cooking, the spongier the texture (and the lower the price). The USDA breaks down each ham type thusly:

You can find hams in whole and half sizes. They weigh from 12 to 20 pounds and will serve 20 to 25 people, with leftovers. The shank half is from the lower part of the leg and is relatively easy to carve. A 6- to 10-pound shank half serves 10 to 12 people. The butt half (also called the rump half) is from the upper part of the leg. It includes part of the hip bone (the aitchbone), which makes carving more difficult. A 6- to 10-pound butt half serves 12 people.You may find a partially boned whole ham, (club ham). They have the aitchbone removed and are really easy to carve. While they cost a bit more, they are worth seeking out.

What About Spiral Cut Ham?

I recommend you pass them up. First, the pre-cut ham will easily dry out in the oven and second, can we talk about that chemical tasting glaze that usually comes with it? Blech. You can whip up a much nicer glaze yourself with pantry ingredients in about the time it takes to open up that plastic sachet of goo that came with the ham.

What about “All-Natural” Hams

Hams labeled “uncured” are a little misleading in that they still contain nitrites, but the nitrites come from a vegetable source, like broccoli or celery. The USDA allows manufacturers to label these hams, “no nitrites or nitrates added” because the USDA only requires producers to declare nitrites if they are used as an added chemical.

Since the USDA defines “all natural” as “minimally processed,” ham can’t be called “all natural.” Companies using the “all-natural” claim on ham are usually referring to the animal, which was not treated with antibiotics or growth stimulants.

Ham is one of the easiest cured meats to make at home, as the CuliNex team learned during one of our holiday education sessions. The key is keeping everything clean and choosing a cut of meat that will brine safely at home; typically, a half leg or a pork shoulder.  For details on making ham at home, check out The Great Meat Cookbook by Bruce Aidells and yours truly (2012, Houghton-Mifflin) for detailed instructions on how to make ham at home and a whole bunch of great recipes for ham glazes, and leftovers for the morning after your holiday meal.

Looking for meat expertise on your next product development project? Give us a shout! Anne-marie is our resident meat expert with years of expertise in meat fabrication, further processed meat products, HMRs and deli products. We’d love to help!