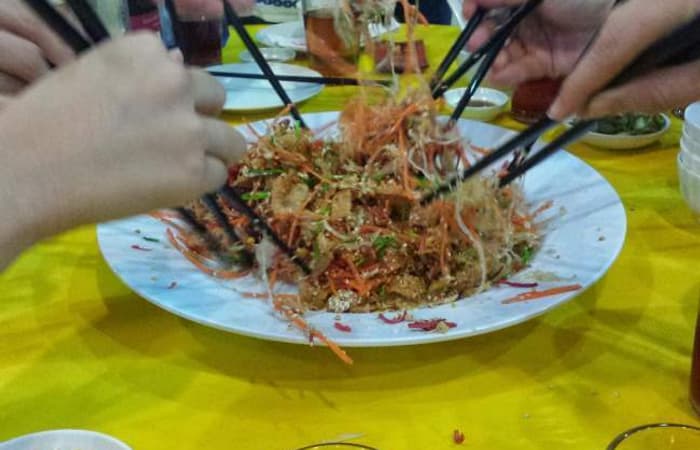 Foods of the Chinese New Year

The Chinese New Year is a time of joyous celebration for many people around the globe, but those of us that aren’t of Chinese descent may not truly know what it means (or even what time of the year it is!). Prior to my study abroad during my sophomore year of college, I had no idea what it entailed. Unbeknownst to Katherine Langel and I, we just happened to study in Malaysia during the Chinese New Year in 2015, and it was a blast! We were so heavily influenced by the foods and festivities of the holiday that they still influence my personal cooking style to this day.

What is the Chinese New Year?

Gong Xi Fa Cai! Unlike in the US where a new year means champagne toasts and loosely kept resolutions, the Chinese New Year is one of the most important holidays in the Chinese culture.

Rather than being based on a solar calendar, it is based on the Chinese traditional lunisolar calendar which indicates the moon phase and the time of the solar year. Since it is based on the lunar month which is two days shorter, an extra month is added every few years to catch up the lunar calendar to the solar calendar. This is why the beginning of the Chinese New Year begins and ends on different dates every year. This year, the year of the Rooster, starts on January 28th and ends on February 5th of 2017.

How is it celebrated?

With plenty of gifts, family and food, of course! Chinese families visit relatives and friends, launch fireworks, have religious ceremonies, shop at markets, watch Chinese lion dance shows, clean and decorate the house, travel, and give or receive red envelopes of money. Every tradition is meant to bring luck and success in the new year.

What foods are eaten?

Taiwan, Hong Kong and Macau, The Philippines, Malaysia and Singapore, the United Kingdom, Australia and the United States all have populations that celebrate the Chinese New Year. Each region of the world celebrates the Chinese New Year with different foods, but there are some that are fairly consistent throughout each culture. Fish, spring rolls, and good fortune fruit, such as oranges are commonly eaten, as well as traditional dishes like laba congee, nian gao, longevity noodles, yee sang, and tang yuan.

Prior to the start of the Chinese New Year, there is a traditional Laba Festival on the 8th day of the last month of the year where Laba congee (a type of rice porridge) is eaten in celebration to the prelude of the new year. Laba congee is meant to be a nutritious meal filled with the harvest of the previous year and flavored with preserved fruits, melon seeds, lotus seeds, and pine nuts. It starts with cooked rice and is traditionally boiled for hours in order to fully release the starch from the glutinous rice until it reaches a gelatinized and thick consistency. This celebration is meant as a day of thanks for a good year and sacrifices made by one's ancestors. This is also believed to be the day on which the founder of Buddhism, Sakyamuni, reached enlightenment and became immortal. On this day, many temples open their doors and serve free porridge to the public as an act of service and to honor their god. This is also the day when people begin the soaking of Laba garlic in vinegar for twenty days which is eaten with other foods throughout the holiday.

Another traditional food eaten is nian gao, "year cake" or Chinese New Year's Cake, and is believed to symbolize growth and progress. Those that eat it hope to receive a higher income or a higher position for the upcoming year. Very popular in Eastern China, it is a traditional solid cake made of only three to four ingredients; sugar, water, and rice flours. It is known to have gone back at least 1,000 years to the early Liao Dynasty in Beijing where people ate New Year cakes on the first day of the first month of the lunar year. While it is a very traditional and simple cake, it is prepared and served in many different styles and flavors in different regions of the world: it is served both sweet and savory and cooked a variety of ways, including steamed, fried, or cooked in soup. Regional variations include yellow rice and white cake in Northern China and "red turtle cake" in Taiwan.

Symbolism is an important part of all Chinese New Year traditions. Dumplings are thought to represent longevity, health and especially good fortune because their shape is similar to the gold ingot, one of the early Chinese currencies. In Northern China, dumplings are traditionally eaten at midnight for New Year's Eve dinner, while in Southern China it is traditional to eat them throughout the entire holiday. The classic Chinese dumplings are filled with a mixture of garlic, scallions, and pork. Other commonly added ingredients include chives, cabbage, mushrooms, seeds, depending on what the family has on hand or from their harvest. Some different fillings and their meanings:

Just like their fillings, there are numerous cooking options for dumplings too, including boiling (the most common), pan-fried, and steamed (my favorite!). To serve with the dumplings, a flavorful dipping sauce is prepared, including rice vinegar, soy sauce, toasted sesame seeds, and sometimes fresh ginger, chilies, or other ingredients.

There are over a thousand types of noodles in China: thick, thin, hand-pulled, knife-cut, made with wheat flour, rice flour, soy bean paste or mung bean starch. However, in terms of length, almost all noodles are served long. Why? Because the long length represents longevity in life and prosperity. As with the multiple ways to make noodles, there are multiple ways to cook them as well. Stir-fried, deep-fried, boiled, steamed, cold, pan-fried and served in soup are just some of the ways that noodles are eaten in China. For the Chinese New Year, there is no typical or traditional noodle dish that is served, just as long as there is some kind of long noodle dish.

Although not traditional in Chinese countries, Yee Sang is a dish that's prepared by families celebrating the holiday in Malaysia, Singapore and Indonesia. Yee Sang, or “Prosperity Toss Salad”, means "increase in abundance and vigor" and is a colorful dish made of many different ingredients, such as shredded daikon, cucumber, jicama, carrots, peeled taro, cilantro, pickled ginger, sesame seeds, peanuts, fried dumpling strips, lime juice, and a five-spiced Chinese plum sauce dressing. While most New Year dishes are prepared and eaten at home, Yee Sang is a dish that most families go out to Chinese restaurants to eat. What makes Yee Sang special is that it is tossed high in the air by everyone eating it, all while shouting "Lo Hei!" and other blessings for the new year.

This dish is traditionally eaten during Yuan Xiao, or the Lantern Festival which is the 15th day of the first month of the traditional Chinese calendar. Tang Yuan are small sticky balls made from glutinous rice flour. To make them, glutinous rice flour is mixed with a small amount of water, formed into balls and then cooked in boiling water. Colored red, yellow, and green powder is sometimes added to the glutinous rice flour to make colorful rice balls appealing to children and young adults. And like so many other dishes, tang yuan varies in each region by being prepared in many different ways; filled or unfilled, sweet or savory, served in a ginger syrup, salty broth, and filled with either red bean, peanuts, or black sesame seeds.  When serving, Tang Yuan is ladled into a small bowl with 4 - 5 balls together in the broth or syrup, which visually represents "togetherness" and makes for a delicious dessert to be celebrated with family.