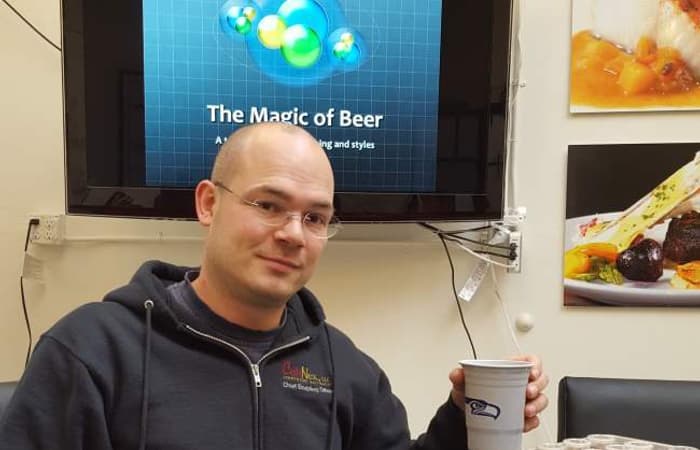 Beer Brewing - A Lesson from our C.E.O

At CuIiNEX, we work hard and like to have fun too. We also believe in continuing education from within. As part of our last quarterly retreat, I hosted a beer making education session. This was a follow up session to an earlier presentation I did for the team walking them through the beer making process; now was time for the hands on experience.

The team as a whole had to decide on the beer style that we would brew and they ended up choosing a Belgium Saison. A good choice for the end of summer, leading into the fall kind of beer. As the C.E.O. of CuIiNEX (Chief Enablement Officer), I chose to aptly name the beer Enablement.

I have been home brewing beer for 13 years, really enjoying the process and experimentation that goes with the hobby. Over time I have built a 10gal all-grain system, enabling me to have the freedom to choose the levels of and characters of the specialty grains that I use and not being tied into premade extracts (barley syrup). Because of this I am able to take on the challenge of an advanced beer like a Belgium Saison.

Beer is traditionally made of four ingredients; water, malted barley, hops, and yeast. As brewers have experimented through time, additional ingredients such as spices, sugars, fruits, and barrel aging to have been used to add unique characters to the beer.

Water is sometimes the simplest component of beer making and sometimes the most complex. It can contribute quite a bit of character into a finished beer, showing regional differences in identical beers through the pH, mineral content, or chemical residue (i.e. chlorine). If certain water profiles are critical to a beer, breweries have the option of using reverse osmosis to strip the water down and then selectively add back the minerals that they want to impact the characteristics that they are looking for in their beer. My water source is fairly clean and I do not routinely do any conditioning of it prior to using. Typically, if the water is good enough to drink, it is good enough for brewing.

Barley is the primary source of sugar for conversion into alcohol. The barley is malted to start germination, activate the enzymes needed for starch conversion, and then dried for stability. Other adjuncts such as wheat, corn, rice, or refined sugar can be used to supplement the barley or to drive flavor profile. There are many different varieties of barley grown throughout the world and each can impact or drive the characteristics of the finished beer. The drying process can impact the flavor profile by caramelizing the sugars, adding a roasted character, or drying it cleanly with little additional flavors being generated.

Hops serve a number of functions in the brewing process. Their primary purpose is to add bitterness that balances the sweetness provided by the malt component. They also have antimicrobial properties that extend the shelf life of the beer. Finally, hops can drive the finished flavor in the beer considerably. The primary growing regions in the world are England, Central Europe, and the United States. These regions drive the proliferation of other smaller hops growing regions in the world. English hops varieties have earthy, herbal, and fruity characteristics. Central Europe hops are floral, spicy, and evergreen. Hops grown in the United States contribute citrus, herbal, and spicy flavors. An India Pale Ale made in England versus the United States differ largely because of the hops varieties used in their construction. The point at which the hops are added during brewing will affect their impact on the flavor of the beer; when hops are added to the boil with 30-60 minutes remaining they contribute bitterness to the profile and when added later, from 0-30 minutes to the end of the boil, they impact flavor. The less time they spend in the boil; the more aromatics they impart. Hops can also be added after fermentation adding delicate top notes to the beer in appropriate styles.

The final primary component of beer is yeast. Yeast selection is very important in determining the final flavor characteristics of a beer. Each beer style has a complementary yeast that drives the overall flavor of the beer. Based on how the yeast is treated and nurtured, different flavors can be influenced. For example, an American wheat beer will have different flavors contributed by the yeast depending on the temperature the beer is fermented at. When fermented at lower temperatures such as 66°F, the yeast will produce by-products lending clove-influenced flavor. The same yeast when fermented at 70°F will produce a banana-driven profile. A Belgium yeast used in an English style beer will not produce the typical profile and vice versa.

Having brewed a wide variety of styles, but not a Belgian Saison, I went to the most reliable resource I had, Brewing Classic Styles by Jamil Zainasheff and John Palmer. This book is a collection of recipes from award winning beers from experts in their field; I was in good hands. Our expected starting gravity target was 1.060 with a finished gravity of 1.008, roughly 7% abv (alcohol by volume). Specific gravity is measured with a hydrometer and gives the amount of dissolved solids in a liquid, in this case, sugar. As the sugar is consumed in fermentation, the amount of dissolved solids decreases.

When all of the wort is in the boil kettle, the temperature is increased and the wort is brought to a boil. The wort is boiled for a number of reasons; deactivation of enzymes, denaturation of proteins, boil off unwanted off-flavors, activation of the hop compounds that add bitterness, and most of all, sanitation. The duration is typically 60 minutes based primarily on hop bitterness though some beer styles need an additional 30 minutes to boil off off-flavors that come with certain grains. Once the wort is boiled for the prescribed time, it needs to be rapidly chilled to prevent contamination and development of off-flavors. The chilling also causes additional proteins to drop out of solution. The wort can be chilled in the kettle by placing the kettle in an ice bath or by running cool water through a contained copper coil that is inserted in the wort during the boil. The other cooling option is to pass the hot wort through a heat exchanger directly into the fermentation vessel (tube-in-tube or plate).

The last step in the brewing process is packaging. Many homebrewers start with the least costly option of bottling. Unfortunately, bottling takes a lot of time, energy, and physical space; both in the actual bottling and management of bottles. Kegging, though a high capital investment, is much simpler in process and execution. For comparison, one five-gallon batch of beer makes approximately 50, 12oz bottles or one five-gallon soda keg.

We brewed our beer on 8/26/16 and as of 10/11/16 the specific gravity was only down to 1.026, not quite at our target of 1.008. The yeast in this particular style has a tendency to go against convention and can end up taking longer than predicted. When the gravity was measured on 9/24/16, the specific gravity was 1.042. The flavor is on style and still slightly sweet. Given another month, the fermentation should continue down to the terminal gravity and be ready for packaging. If we wanted to get the fermentation finished faster, now that the flavor profile is established, a neutral helper yeast can be added to drive down the remaining sugar content.

To develop food products, it’s vital that we understand each ingredient and its functional role in the finished good. Our home brewed beer is just one especially tasty case study. For more information on our product development process, check out our services.